A vanguardist tango musician from the 60s.

Alberto Pascual Caracciolo (1918-1994) was a brilliant tango musician. He was a musical arranger, orchestra director, composer and bandoneon player.

He was respected and well known by his colleagues rather than by the public in general for Caracciolo always chose to hold a low profile and he acted on different important radios and occasionally on TV but he did not point to having a massive diffusion of his music.

In 2003 his friends and relatives started recording and distributing Caracciolo’s albums to make his music known, for he has been mentioned in different newspapers, magazines, radio and TV, but little music of his is sounding on radios or other places where tango is heard or danced.

Since then, things have changed enormously, due to the issue of two CDs, one of them released by UMI (Unión de Músicos Independientes) and distributed by Pattaya in the most important music shops all over Argentina. His daughter’s email appeared in the CD “Solos de Bandoneón y más…” and many people wrote to her remembering Alberto Caracciolo for his presentations in radios such as Del Pueblo Radio, Splendid, El Mundo, Belgrano which transmitted a concert from the Faculty of Medicine with the best tango avant-garde artists (in the early sixties).

He was born in Palermo, Buenos Aires, on the 23rd of March 1918. He began his musical studies at the age of 8, and at 16 he started playing bandoneon in Antonio Arcieri's orchestra. He played bandoneon for different famous orchestras, such as the ones of Joaquín Do Reyes, Ángel D'Agostino, Manuel Buzón, Victor Braña, Jorge Caldara.

Although he was a tango renewer following a style of his own, he played traditional tango in the “De Ayer... y de Siempre” L.P., produced by Discomundo, for which he created Quinteto Añoranzas, including flute, which was an instrument greatly valued in the old traditional groups (according to Roberto Selles, tango journalist and historian).

He also played jazz although in a minor scale, he made musical arrangements for international publishers, and he was a music counsellor for Odeón (Argentina), in the late 60's and early 70's. As we have already said in our first lines.

Nowadays, his music sounds from Salta to Ushuaia in Argentina, and in Russia, Greece, in this case thanks to Camilo Gatica's work, who finished his studies in art in Santa Rosa, La Pampa, and young musicians have asked for his music scores to teach Alberto Caracciolo’s style in music schools, they are Martín Siccardi from Mar del Plata and Javier Bravo from Buenos Aires City. We have received many surprises on doing this diffusion work, which we will illustrate and describe in due time. 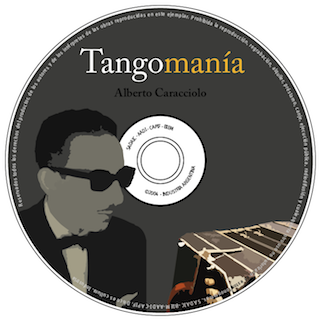